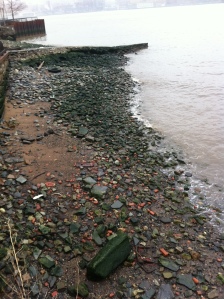 In the off-chance that you haven’t heard about the supermoon – it’s the name someone came up with for the time that occurs every few decades when the moon is at the closest point of its elliptical orbit around Earth, called Perigee, and the moon and sun are also oriented on opposite sides of Earth so that we see a full moon.  This leads to a slightly larger looking full moon – the supermoon – but also leads to much larger ocean tides than are normally the case.  “Spring” tides occur soon after the full moon (and new moon), and the supermoon makes for unusually large spring tides.

As a result of the sun and moon “pulling” the oceans in unison (spring tide), and the moon’s pull* being largest due to its point on its orbit (perigee), the past two days have had large tidal ranges in the Hudson and strong tidal currents as the water levels undulate every 12.4 hours between unusual highs and lows.  We’ve been fortunate there hasn’t been a nor’easter, which often add 2-4 more feet of water level – even without that extra water, we’ve had minor flooding at several locations. Two extra feet would lead to flooding over many seawalls and three or four would likely shut down the subway system, but that water level is extremely rare.

An interesting additional factor out on the Hudson River these past few weeks has been the ongoing “spring freshet” pulse of snowmelt and rainfall flood waters.  This adds an additional force to the mix—the enhancement of seaward ebb-tide currents due to the force of additional water added into the Hudson from river tributaries.

The combined effect has been the strongest non-storm currents you’ll ever see in the Hudson, as high as 5 miles per hour (2.2 m/s), relative to normal daily peaks of half that.  (Nevertheless, this is only roughly equivalent to the typical daily peak tidal currents on East River, which gets stronger currents because it is actually a tidal strait between Long Island Sound and New York Harbor.)

Modeled (past and predicted) and observed Hudson currents (arrows show direction) and water levels (relative to mean sea level, MSL) at the center of the Hudson west of 79th St boat basin, with hour from midnight on 3/22/11 on the x-axis. Figures are from NYHOPS, http://stevens.edu/maritimeforecast.

Also noticeable during the freshet and especially with a coincident spring tide is that the water is also muddier than any other time of year, more of a grey-brown, and with almost no hint of the chlorophyll green that you get in summertime.  The exact color depends on where you are along the Hudson, as the Harbor has more ocean water and Haverstraw and Tappan Zee are shallower and muddier.

* Note – the gravitation of the moon doesn’t simply pull on the ocean to create a tide — it is strong enough that the Earth and moon rotate as a pair around a central point, and as a result there is a bulge of the ocean on both the same side as the moon AND the opposite side.

1 Response to The Hudson’s Supermoon Spring Tides and Freshet