Lessons on Containment for the Climate Pandemic

In the month of March, COVID19 deaths nationwide grew exponentially, at 20-30 percent per day, leading to a doubling every 3 days.  New Columbia University modeling shows the benefit of heeding scientific warnings early and using containment measures to stem a problem with explosive growth like COVID-19.  If social distancing and other containment measures were instituted in New York City just two weeks earlier, there would have been 94% fewer deaths.

Look closer at the numbers, and you’ll see how climate change and COVID19 are similarly explosive problems (see Figure below), with similar dangers from missing the opportunity for containment.  One silver lining is that the pandemic has led us to change our lives in some ways that could be made permanent, to simultaneously rein in climate change. 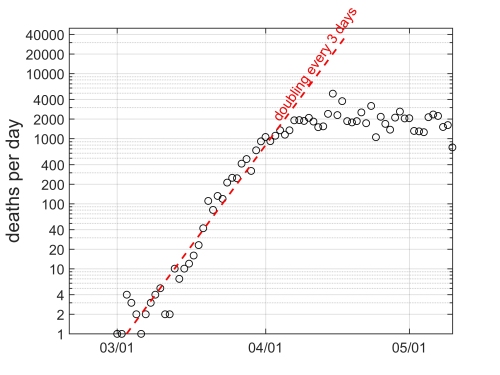 Figure:  (top) US daily COVID-19 deaths from late February to early May, and (bottom) floods per year caused by global sea level rise for Hamilton Beach, Queens, based on the water level that begins flooding streets there (7.1 feet above normal low tide).

Scientists have warned for decades of the catastrophic future effects of global warming; yet with little action to reduce carbon emissions since then, today we are experiencing a global average temperature of about two degrees Fahrenheit higher than it was in 1880 during the pre-industrial era.  We are actually fortunate that 90 percent of the heat has actually been absorbed by the ocean instead of warming the atmosphere.  However, the result of this is slowly-building, but accelerating, sea level rise.

As a result, many locations are seeing exponential growth of the number of floods per year, leading to calls for massive, expensive projects to avoid becoming uninhabitable.  For example, in some neighborhoods of Charleston, Atlantic City, and New York City — in the latter case the Hamilton Beach neighborhood near the John F. Kennedy International Airport— we used to see sporadic, occasional floods, but now these are happening about 40-60 times per year (see Figure).  These locations that have frequent nuisance flooding today are unusually low-lying neighborhoods built on landfill over wetlands.

Within a few decades rising sea levels will cause neighborhoods at higher elevations to be similarly affected with chronic flooding, affecting property valuing in the trillions of dollars.  For example, my research with the New York City Panel on Climate Change has shown that within the city today, chronic tidal flooding affects streets where 1700 people reside. In the 2050s this could rise to 34000 people, and by 2100 it could rise to 750,000 people, if the Antarctic ice sheet begins to collapse and dramatically increase sea level rise.

Unchecked, COVID19 had a doubling time of days, and one might be comforted by the fact that floods are doubling much more slowly, every decade or so.  However, there is another critical difference:  The ramp-up time for containment activities for COVID-19 was weeks-to-months, with testing and contact tracing.  The ramp-up time for alternative energy sources to replace fossil fuels is decades.  If we fail to stop emissions rapidly, there is wide agreement that the consequences will be devastating – eventually sea level rise of several feet will require retreat from the rising ocean.

A wise recovery plan from the pandemic will help address both of these explosive problems.  For example, businesses can create permanent policies that encourage more work from home and less automobile and airplane travel, reducing carbon dioxide emissions from transportation that are a major contributor to global warming; some are finding this actually enhances productivity.  Going further, long-term policies can promote smaller offices with fewer on-site employees, reducing the need for office space that is empty a majority of the time – building energy is also a top source of emissions. Cities could become more livable, with more empty building space available to create housing.

One of the most profound lessons taught by our virus response is that we are all capable of transformative change.  The only long-term solution for containment of the climate pandemic is to eliminate carbon dioxide emissions, and now that we’ve taken steps in the right direction, we should avoid backtracking to business-as-usual.