Posted on January 7, 2011 by michaelsbruno

All good sea stories should begin with “no shi#, there I was”. This is one of those. [censored to avoid continuing to get blocked by school obscenity filters …]

Back in the summer of 1994, Professor Tom Herrington and I were taking our small research vessel R/V Phoenix (26 foot, outboard) from Cape May back home to her berth in Jersey City. The trip turned out longer than we expected because of rough seas and we ended up navigating into New York Harbor in the dark. No GPS or electronic navigation back then; thank heavens for the Navesink Light and Ambrose Light.

As we made our way west and north via the Ambrose Channel, we were awed by the scale of everything around us. The commercial vessels soared like skyscrapers above Phoenix as the NYC skyline came into view in the distance. Our small boat had performed admirably on a long, uncomfortable ride along the entire New Jersey shoreline, and now seemed to struggle just to make way in the swift currents and opposing waves during a peak outgoing tide. Not to worry, we were less than an hour from home. Or so we thought.

As we turned north in the channel and approached the Narrows – the straight that separates Staten Island from Brooklyn, and the Upper Bay from the Lower Bay, Tom and I marveled again at the scale of it all: the soaring cliffs on either side, the majestic Verrazano-Narrows Bridge (the longest suspension bridge in the world when it was completed in 1964), and of course the enormous cargo vessels to our south and our north. 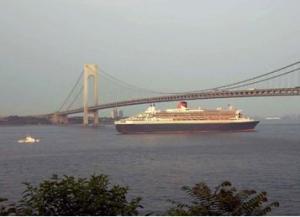 Just then – no kidding, right underneath the bridge, in the area where the tidal currents are strongest – the Phoenix lunged to a halt. Before Tom and I could say a word, the boat turned broadside to the current and we began rocketing southward in the main channel with absolutely no steerage, and large ships all around us.

Without even a moment of debate, the two of us shouted the same conclusion – we’re out of gas! We each grabbed what was nearest – Tom the spare gas container that we always carried on board (another story) and me the key to the fuel tank. Within 60 seconds – a record, I’m certain – we had thrown the fuel into the tank and Tom had turned the engine over. Good thing, because we had by now drifted a remarkable distance south, in the center of the busy main channel.  Phoenix quickly came back on course and we headed home. The lights of Manhattan Island never shone so bright or appeared so welcoming as that moment when we cleared the Narrows.