Urban Air Conditioning On the Piers of Manhattan

I am spending the afternoon working from Pier 45 of Hudson River Park, just across from Christopher and 10th Streets.  Not only is the temperature a comfortable ~75 degrees, but there’s a clean-air breeze (though sometimes a bit strong), cool open-air water sprayers, green grass, enclaves of trees, and dozens of very happy people laying about in the sun with a minimum of clothing.  And perhaps most important for my ability to be here working, there’s open wireless internet and a few tables in the shade.

The cooling effect of winds that pass over the Hudson is strongest in the spring, sometimes too strong, due to the cool water temperatures.  You can actually get a good sense of the conditions at this particular park by checking out the NYHOPS Castle Point Buoy weather station, which is in the open water on the other side of the Hudson.  Right now, here are the temperature plots for Central Park (87 degrees) and the Buoy (77 degrees). 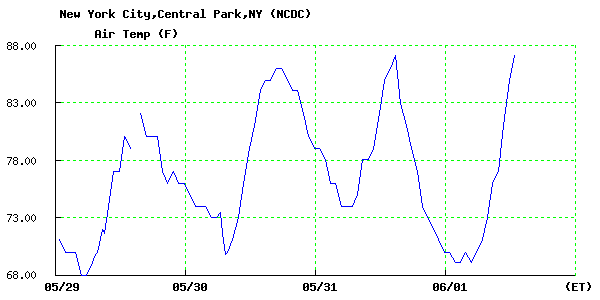 Air temperature: Central Park, on Belvedere Castle (Nat'l Weather Service), with the date of each new day shown at midnight 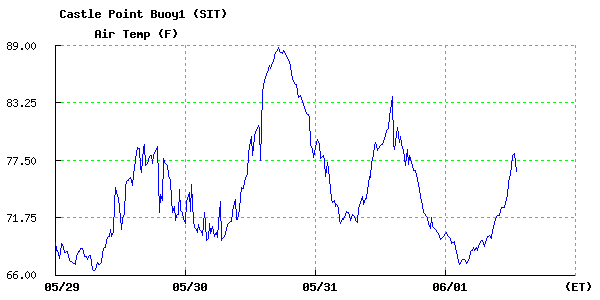 The water temperature mainly governs the cooling effect, though if there is no wind, then there is no cooling effect.  The Hudson’s water temperature has been in the mid-to-upper 60’s for the past four days, also measured on the Castle Point Buoy (not shown).  The wind direction is also important — a south wind blows along the Hudson, so has a lot of time for cooling over the water, whereas a west wind blows across the Hudson, and does not.

You might wonder why Central Park temperatures were similarly hot each of the last three days, but high temperatures on the water (Castle Point buoy) have decreased each day — May 30th was actually hotter on the water.  This is because the winds were light and variable on the afternoon of the 30th, and there is very little loss of heat from the air to the water when the wind is weak.

Wind speed (y-axis) and direction at the Castle Point Buoy. The rotation of the arrow indicates the wind direction, with the arrow pointing up when the wind comes from the south. One knot is equivalent to 1.15 mph.

Today, the wind on this side of the river is gusting to about 15 or 20 miles per hour, plenty enough to cool the air, but also plenty enough to give me a headache … I guess I’ll head to the office!

Hopefully, the city can equip more of its parks with open wifi hotstpots, after years of talking about it.

2 Responses to Urban Air Conditioning On the Piers of Manhattan