Bike Touring the Aftermath of the Riverbank Sewage Meltdown 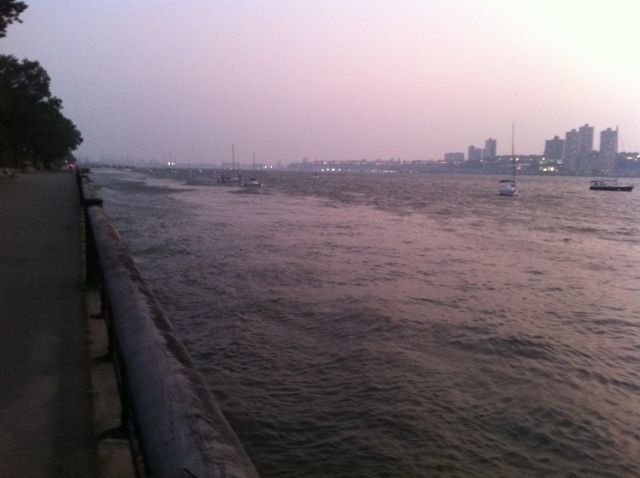 Raw sewage/freshwater plume (smooth water) about 40 feet wide on the Manhattan side of the Hudson at 96th Street, looking south

You likely heard the news, that a fire at the North River Wastewater Treatment Plant, which lies beneath Riverbank State Park, disabled the facility Wednesday afternoon.  As a result, the city cannot treat sewage from roughly half of Manhattan, and the only obvious solution is to send it straight out of pipes into the Hudson River (possibly also the Harlem River, though the City has not put out ANY warning of that to this point …).

I did a little bicycle tour of the east side of the Hudson this evening, from 26th St to 125th St., then crosstown on 120th Street to the Harlem River.

Heading from south to north, I saw and smelled no evidence of spills south of about 79th St. Boat Basin, and kayakers at Manhattan Kayak Club (27th St.) had only heard a few sightings of “floaters”, which might even have been mistaken identity.

Starting after 79th Street Boat Basin, a slick appeared close to shore (picture above).  The slick was erratic at first, but got wider as I went north, until it was about 100 feet wide at 125th Street (below). 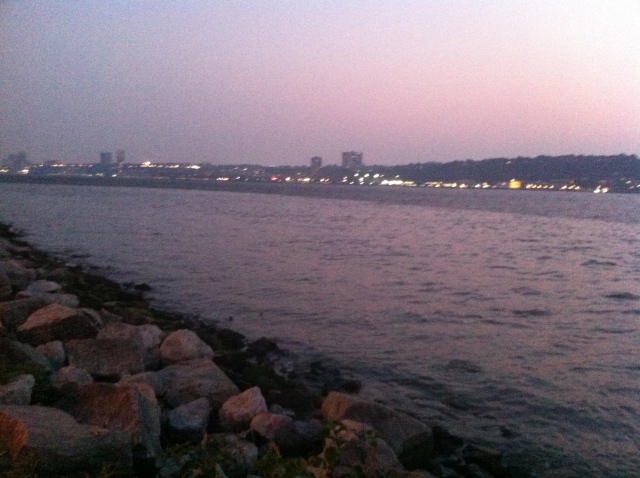 Raw sewage/freshwater plume (smooth water) about 100 feet wide on the Manhattan side of the Hudson at 125th, looking south. Rougher and darker looking water marks the offshore boundary.

There at the south end of West Harlem Piers Park, I took pictures of the outfall (uck!), though it was a bit dark by then, well after sunset.  This was in line with the fact that the Riverkeeper patrol boat only observed sewage spills occurring at 125th Street and Dyckman Street to the north.

The tide was ebbing toward the ocean, with wind and waves coming from the south.  The fact that the plume dwindled as it went south with the ebb currents and choppy wavy waters (causing mixing) made good sense.

It is very likely that this smooth-water region was the sewage and freshwater plume — I have a lot of field and research experience tracking freshwater plumes from rivers, from boats, helicopters and radar imagery from satellites.  The smoothness of the water surface and the sharp gradient offshore, coupled with my actually following it to the source, strongly supports this interpretation.  The water surface can be made smoother when there is freshwater at the surface because the estuary water is salty and has a higher density. Therefore, the water becomes density-stratified (or layered, like some cocktails) and resists vertical motions.  Additionally, the sewage-tainted water is ladened with high amounts of organic matter and oils, which also act to smooth the sea surface, due to weaker surface tension — this relates to a famous story about Benjamin Franklin, who sprinkled oil on a lake with his cane like a sorcerer to “magically” stop waves.

It is worthy to note that the “sewage” was basically just brown water, with no obvious floaters.  I am beginning to realize from this experience and other online footage, that’s just how raw sewage looks after running for miles through the pipes…  and it smelled, but not much except right at the outfall (perhaps due to strong winds and dispersion).  Yet, this is still very dangerous water, which can cause severe illness if people come into contact.

It was totally dark by the time I reached Harlem River, but I saw and smelled no obvious sewage problems in my short survey from 120th Street to 96th Street.

In my next post, I will show and discuss our model results for sewage plume dispersion, which we have been sharing with the Department of Environmental Protection and the Hudson River Foundation.  Those model results suggest that the dispersion is likely much more broad than my personal observations at this one time would imply.  However, the model results do not include decay.  The dangerous bacteria are thought to survive less than one day, and this is an area where the physics can only tell you so much — it will require more collaboration and understanding of the microbiology to determine where the plume is actually dangerous, much like with last summer’s oil spill in the Gulf.