[a more recent forecast followed this one – go straight to SeaAndSkyNY.com and scroll down to find the latest update]

This evening, the Hurricane Irene forecast from the National Hurricane Center has held fairly steady, with little good news for New York and New Jersey interests.  Irene is currently forecast to pass right along the NJ coast and across New York City as a strong Category 1 Hurricane on Sunday August 28th.  As before, the forecast at two and a half days lead time is still highly uncertain — one model predicts it going over Washington D.C. and northward, and two models (of eight) predict it going far offshore, east of Long Island.  But the worst case scenario was spelled out in a recent post, comparing the storm to a hurricane that hit NYC in 1821. The chances of NYC getting very dangerous 58+ mph steady winds are about 25% (see above), and the chances of having hurricane force (74+ mph) winds in NYC are 5-10%.  However, the deadliest part of a hurricane is typically its storm surge, and even if the eye doesn’t hit NYC, we could see our worst storm surge in over 100 years.

NOAA’s storm surge model (P-SURGE) is providing useful information in their 3 day forecast for our area, listing the probability of a 4+ foot storm surge at 10-20%, and an 8+ foot surge at 5-10%.  Depending on the timing with high or low tide, this water level could lead to overtopping of seawalls around the New York City inland waterways, and flooding of low-lying infrastructure (subways, PATH train, tunnels, FDR highway, etc.).  Stevens Institute’s two-day advance forecasts of storm surge, as well as waves and currents for NYC, NJ, Long Island waterways, are posted at about 1:30 AM daily, so look for them Saturday morning to give highly detailed forecasts for Irene’s impacts.

The timing of the passage of Irene, during a new moon (Aug 29) at perigee (Aug 30), means that the spring tide range on Sunday will be one of the highest of the year.  Presently, the Hurricane is forecast to approach the southern NJ coast early Sunday morning, and arriving around NYC at an intermediate tide (5 pm). 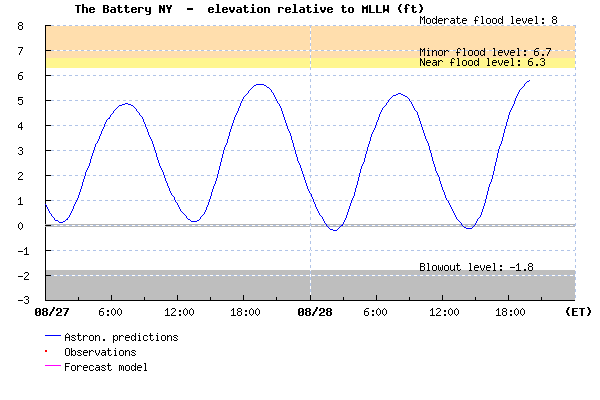 Predicted Tide (NOT including storm surge) at The Battery, New York City, for Saturday and Sunday August 27-28. High tides along Long Island are at a similar time, and along the Jersey Shore are about one hour earlier.

Keep your fingers crossed — the exact track of the hurricane can vary by 200 miles beyond the 24 hour forecast.  However, this is a large hurricane that will broadly impact the entire region.  The National Weather Service and local Offices of Emergency Management (NJ, NYC, Nassau and Suffolk counties) are now urging people to begin to make preparations for the storm.  For the most current storm guidance, watches and warnings go to the NOAA Tropical Prediction Center: http://www.nhc.noaa.gov/index.shtml

Tom Herrington and Nickitas Georgas also contributed to this post.