Hurricane Irene’s eye and peak intensity are now about 17 hours away, though the storm is already impacting our weather.  The latest National Hurricane Center forecast (2pm) calls for the center of Irene to pass right along the New Jersey coast as a Category 1 Hurricane (80 mph winds) and make landfall around the eastern boroughs of NYC at about 9 AM on Sunday August 28th.  The storm track and timing of arrival in our area is becoming increasingly certain.  Due to the expected time of landfall, the peak storm surge for NYC should arrive in many places with the morning high tide, which will add about 2.5 feet of water to the surge. 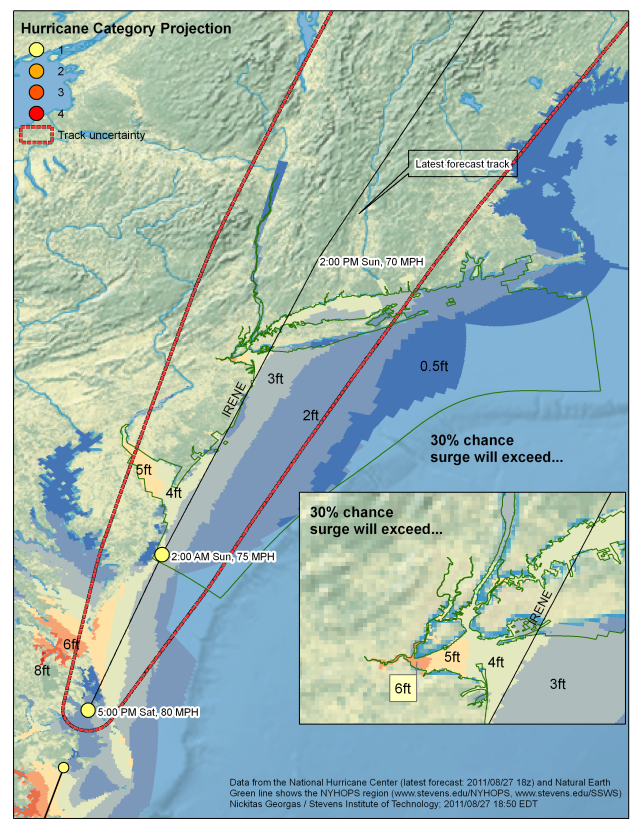 NHC forecast track for Hurricane Irene, including the storm surge heights that have a 33% likelihood of being exceeded (from NOAA's P-SURGE). Our Storm Surge Warning System (SSWS) domain is also superimposed with a green border. Both prediction models are discussed below. Courtesy of Dr. Nickitas Georgas.

The National Hurricane Center now maps the chances of the NYC area getting very dangerous 58+ mph steady winds at about 40%, and the chances of having extreme, hurricane force (74+ mph) winds 5-10%. Winds on high-rise structures are going to be stronger — here’s a quote from the latest NHC forecast discussion:

MORE SO THAN WITH MOST STORMS…THE WINDS WITH IRENE INCREASE SHARPLY WITH HEIGHT ABOVE THE SURFACE.  AS IRENE MOVES THROUGH AREAS WITH HIGH-RISE STRUCTURES…THESE STRUCTURES WILL EXPERIENCE WINDS SIGNIFICANTLY STRONGER THAN INDICATED BY THE ADVISORY INTENSITY.  WINDS AT THE 30-STORY LEVEL WILL LIKELY BE 20 PERCENT HIGHER THAN AT THE SURFACE…AND WINDS 80-100 STORIES UP COULD BE ABOUT 30 PERCENT HIGHER THAN AT THE SURFACE.

The storm’s winds, coupled with expected heavy rainfall and a possible high storm surge, are likely to create a very dangerous situation, so people are urged to consult the webpages of the National Weather Service and local Offices of Emergency Management (NJ, NYC, Nassau and Suffolk counties), which have begun evacuating some low lying areas and have instructions on how to make preparations for the storm.  NYC evacuation zone maps are also posted here.

NOAA’s storm surge model (P-SURGE) is a useful system for hurricanes with uncertain storm track and winds — it uses many possible weather forecasts instead of just one for the forcing of its storm surge model, so gives a broader perspective than a single forecast.  P-SURGE results suggest the probability of a 4 foot or greater storm surge for most of New York City’s inland waterways are about 50% [on the rise].  If added on top of the morning high tide, this water level could lead to overtopping of seawalls around the New York City inland waterways, and flooding of low-lying infrastructure (subways, PATH train, tunnels, FDR highway, etc.).  They list the probability of a more devastating 8+ foot surge at 5-10%.  This is in addition to expected heavy rainfall, which will merge with the storm surge some in low-lying areas.

Stevens Institute’s two-day advance forecasts of storm surge, as well as waves and currents for NYC, NJ, and Long Island waterways show a small storm surge of only 2 to 4 feet, but occurring at high tide in the morning.  This is based on a single wind forecast, so it does not represent the conservative worst-case scenario for New York City area flooding — it is more of a median scenario. 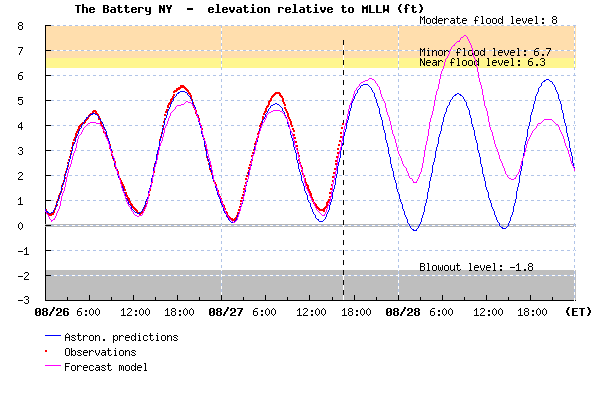 The Stevens Institute’s Storm Surge Warning System (SSWS) has been demonstrated to provide highly accurate storm surge and wave predictions throughout New York Bight and its inland waterways, with mean water level errors of ~0.10 m since June 2006, a period that includes extra-tropical storm Ernesto in early September 2006.  SSWS has not been tested under tropical storm or hurricane conditions, so I recommend focusing on the storm surge predictions of NOAA’s P-SURGE forecasting system to have a broader viewpoint.  The tides themselves are much more predictable, and a benefit below is that you can see the times of high tide and get the perspective that the tidal range (5-6 feet) is as important as the storm surge (likely between 2 and 8 ft).

The prediction for western Long Island Sound, where water levels impact South Bronx and Queens, is for a higher storm surge of nearly 4 ft.  Note that high tide arrives about 3 hours later in western Long Island Sound, versus The Battery, the ocean beaches, and most other parts of NYC.  East River is also complicated — in spite of its extremely strong (and likely dangerous) currents, high tide progresses slowly up the East River from The Battery (8:06 AM) to Manhattan’s 90th Street (10:00 AM), and Hell Gate (Randall’s Island), which is similar to Kings Point.