It keeps striking me how we seem to hit 50+ degree temperatures every week this winter, so I checked it out.  Here’s a plot showing hourly temperature data at Central Park and La Guardia.  Not only have we hit 50+ every single week all winter, there’s also an interesting periodicity to the data. 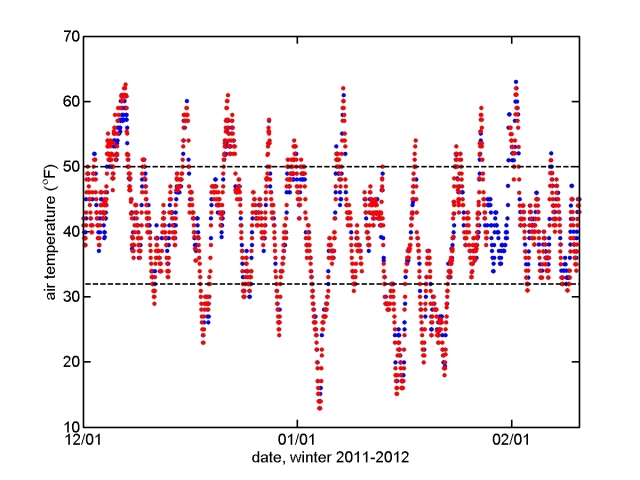 The periodicity is caused by weak weather systems pushing through the US northeast, presumably riding on periodic north-to-south waves of the jetstream.  These systems bring cooler air but but the colder arctic airmasses have been trapped up north this year, unlike the winter of 2010-2011.

Also, it hasn’t dropped below 30 degrees in three weeks, though that’s changing this weekend.  Obviously the ground can’t freeze when it barely gets down to 32 at night, so it’s no surprise that we have shoots sprouting in the core of “winter”.  Many weeks have even hit 60+ degrees.

The latest forecast finally suggests we’ll have a full week or more without hitting 50 degrees F, though there’s a chance, with forecasts highs of about 47-48 by the end of the week.