Presenting Wednesday: Impacts of Irene & Lee on the Hudson 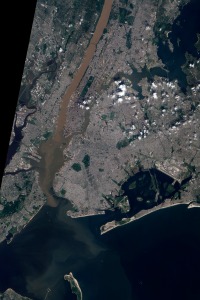 Satellite photo of NYC area with a muddy Hudson River

During a torrid week in 2011, cities and communities along the Hudson River were hammered by Tropical Storms Irene and Lee, causing $1.5 billion in damage and creating conditions so unique that scientists and researchers are still studying the effects a year later. On September 19 at Cary Institute in Millbrook, Dr. Philip Orton, Research Scientist for the Center for Maritime Systems at Stevens Institute of Technology, will give the opening talk at a conference hosted by the Hudson River Environmental Society (HRES), where experts in meteorology, hydrology, sediment transport, and biology will come together and share their research on the impacts of Irene and Lee on the Hudson River.

“The unparalleled location of Stevens on the Hudson River allows our experts access to some of the most complex and dynamic waterways in the world,” says Dr. Michael Bruno, Dean of the Charles V. Schaefer, Jr. School of Engineering and Science. “We are pleased that the Hudson River Environmental Society has asked Dr. Orton to give the introductory science talk summarizing the storms and their effects.”

The Hudson River runs 315 miles through New York State and has a profound impact on major population areas from Albany down to New York City. Dr. Orton will discuss how heavy rain and high storm surges from Irene and Lee affected the Hudson’s characteristics and surrounding ecosystems. The summary rainfall of both storms was between 12 and 18 inches within the Hudson Valley. “The cumulative effect of Irene and Lee was a once-in-a-hundred-year event,” says Dr. Orton. “Irene dropped so much rain in so little time, nearly all the salt was washed from the Hudson River estuary southward of Manhattan, and there was only a brief return to brackish conditions before a second storm, Lee, nearly did it again a week later.”

At the conference, he will also detail a more comprehensive understanding of flooding around the Hudson River, by quantifying and demonstrating how the flood waters from coastal storm surges and inland rain merged. Understanding this merging flood allows researchers to better understand the impact of future sea level rise as well as potential increases in storm intensities and rain rates on flooding along the Hudson.

The New York Harbor Observing and Prediction System (NYHOPS), developed at Stevens, and the Hudson River Environmental Conditions Observing System (HRECOS) provided Dr. Orton with observations and computer model simulations that he used to study the storms’ effects. Water elevation, salinity, and direction and speed of water currents are among the many properties NYHOPS displays using real-time data and model forecasts, making it an invaluable tool used by researchers, boaters, the shipping industry, Coast Guard and many others.

“Dr. Orton’s research on the Hudson River and surrounding New York area waterways is an excellent foundation for the Hudson River Environmental Society conference,” says Dr. Alan Blumberg, director of the Center for Maritime Systems. “His enthusiasm for all things ocean-related is contagious and will be an excellent catalyst for a valuable and engaging conference.”

“Many people are surprised an oceanographer would thrive in New York City, but I find it an ideal location,” says Dr. Orton. “The area is very diverse, with estuaries and tidal straits of every kind running through or nearby New York City, making it perfect for my research and interests.” He has researched oceanography for 16 years, studying air-sea interactions, storm surges, biophysical oceanography, turbulent mixing, sediment transport, and ocean acidification and carbon dioxide.

1 Response to Presenting Wednesday: Impacts of Irene & Lee on the Hudson