Here comes Hurricane Sandy, aka Frankenstorm — The “central forecast” for the storm is for it make landfall as a Category 1 hurricane with maximum winds of about 70-80 mph, and run a northwestward course over Southern New Jersey.  Quite importantly for our storm surge forecast, this storm starts like a bad nor’easter and ends like a hurricane, so the storm surge will be building up all day on Monday.  Below I will briefly summarize what our storm surge forecasts say we can expect, as well as what we see as the worst-case scenario for flood elevations.

Bur first, in plain English:  Coastal flooding will probably will be similar to what we had with Irene, but the weather forecast is still not very clear — at worst, flood levels could be several feet above area seawalls and coastal protective dunes, so keep checking back for our latest updates.  Flooding could come as early as Monday morning, but the worst is expected Monday evening.

The weather forecast is still having that “uncertainty problem” — the range of all the different forecast models is large, and some predictions suggest the center of the storm might hit as far east as Eastern Long Island, while others say as far south as the Delmarva peninsula (or the Maryland-Virginia border).  Uncertainty is slowly decreasing as the storm gets closer, so keep checking in for updates.  Regardless, the storm will be very large, and strong onshore winds of over 40 mph will likely extend hundreds of miles off toward “the right of the storm” as its center makes landfall.  This suggests widespread flood impacts, not only localized impacts at the center of the storm.

The NYHOPS Storm Surge Warning System forecast for the NY/NJ Harbor and New York City region is for Sandy’s coastal flood height to be similar to Irene, with about a foot lower in some places and about a foot higher in others.  (However, if you prefer scary stories, take heed of the 10% likelihood flood forecast I describe further below, if you want to know what is a sort-of a “worst-case scenario”). 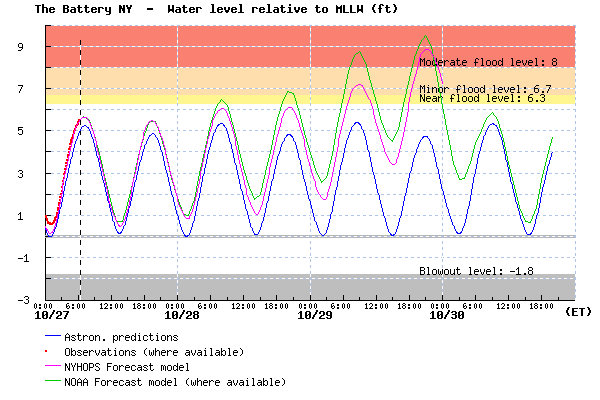 Above is a figure showing the NYHOPS and NOAA forecasts for Battery Park — the New York/ New Jersey Harbor region – 8.9 ft above MLLW (typical low tide level), 6.2 ft above local mean sea level (near NAVD88).  This is about 0.4 ft above some low seawalls around the city; about 0.6 ft below Irene’s flood level.

Above is the forecast for Kings Point and other areas in Western Long Island Sound and the eastern end of East River (e.g. Flushing) – 12.0 -13.5 ft MLLW, 8.0-9.7 ft above local mean sea level; this is roughly 0-1.5 ft above Irene’s flood elevations.

However, one should take heed that we estimate the 10% likelihood exceedance flood elevation (sort of like a mild version of a worst-case scenario) for Sandy to be about 5 feet higher than these forecasts.  This could occur if the storm winds up making landfall with stronger peak winds than are currently predicted, perhaps as a strong Cat-1 hurricane with peak winds from 80-90 mph.  These would be by far the highest flood elevations in the 80 years that records have been kept, and unless efforts are taken to protect vulnerable infrastructure, this could cause some subways, highway tunnels, and electrical infrastructure to be filled with salt water and shut down for weeks.  Until we see forecasts that give more certainty that this will not happen, the population and city officials should be preparing as though these higher flood elevations will occur.  We don’t use our model to quantify this 10% likelihood event — it is based on our model forecasts and expert judgement — but we are seeking funding to develop such a product.

The Stevens NYHOPS Storm Surge Warning System forecast extends three days from each night at midnight, and is re-run with the latest weather forecast each six hours.  It typically shows up about 6 hours after the new forecast comes out, due to the time it takes for model runs and graphics productions – so, look for Tuesday’s forecast any time after 6am on Sunday.