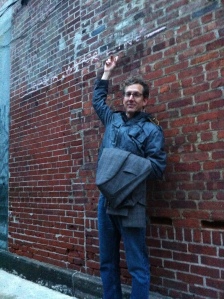 High water mark in the South Street Seaport neighborhood, at South St. and Dover St., just behind (and downhill from) the waterfront. Site is just below the Brooklyn Bridge ramp.

After an interview at Battery Park on Tuesday the day after for ABC News 20/20 Special “The Perfect Storm”, I went on a walk to see the aftermath of Sandy’s visit to lower Manhattan.  My tour took me from Battery Park through the Financial District and then onward to South Street Seaport.

Pre-storm at Battery Park: Will the plywood storm barriers over subway stairwells and air vents be enough? We now know the answer, as six subway lines under East River were filled with water and are only just coming back into service … I don’t know whether these particular plywood boards worked — water could have gotten in through other “holes”.

Soggy plywood after the storm. Seems to have held, but you have to wonder how much water seeps in when there is standing deep water on top for a few hours. 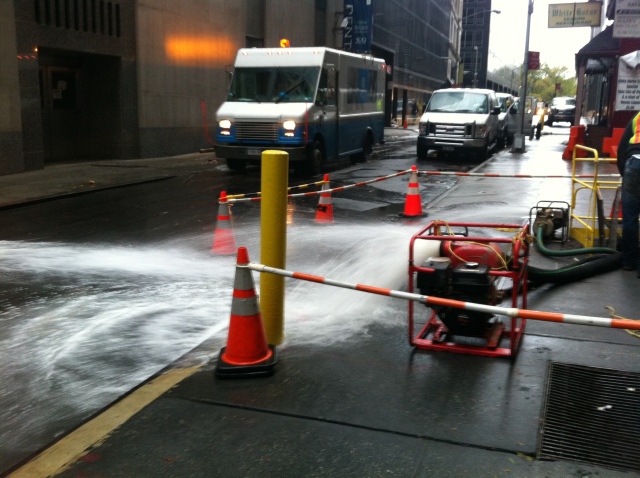 Pumping water out near White Horse, a favorite old bar

The Financial District was a chorus of pumps and generators, lacking power but replete with water.

High water lines of flotsam at the Financial District intersection of Pearl Street and Hanover Square. Bad sign: portable plastic dams in the flotsam line.  Pearl Street used to be paved with oysters, back in the day, which should have been a sign …

“High water marks” such as those shown above will be valuable as we move to improve our storm surge model so that it can predict flooding within the city streets, for forecasts as well as for risk assessment. 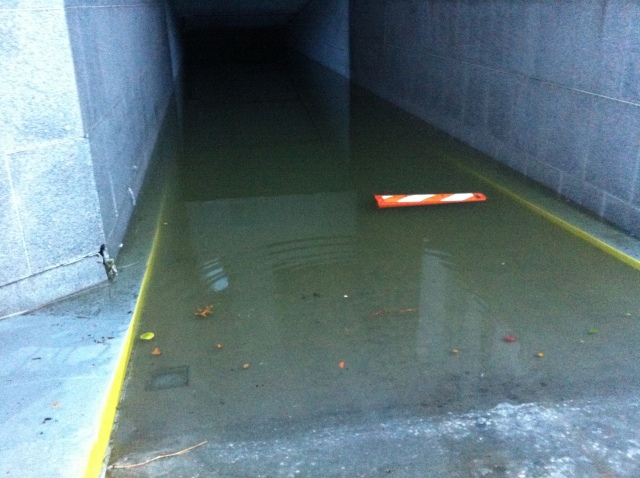 Literally thousands of cars were flooded with seawater in the storm, including large lots full of new cars at the Port of Newark/Elizabeth. 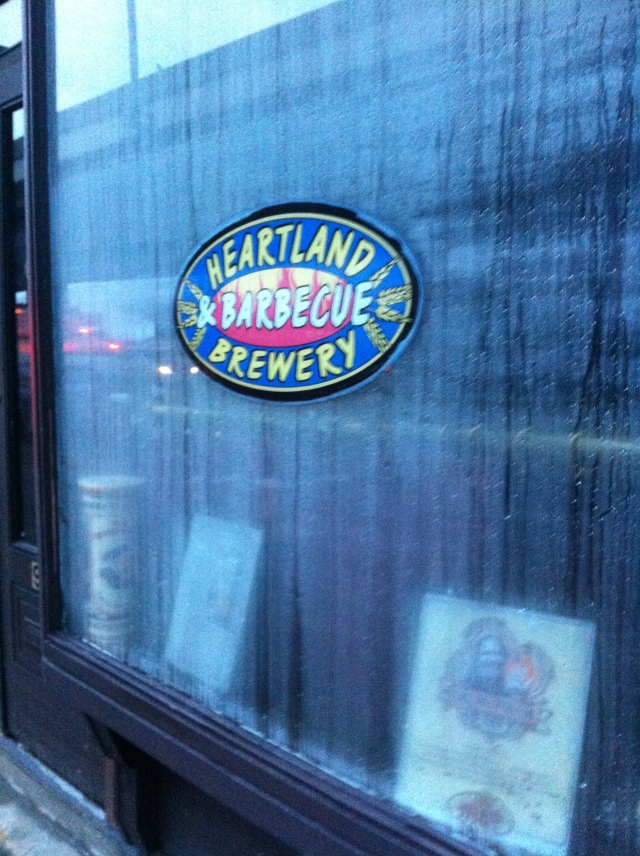 South Street Seaport Heartland Brewers — sandbags in front of the door, but water finds a way — water condensation you see is on the inside.

South Street Seaport’s main drag was a mess, with an oily sheen over every surface due to the cars that were “floated” by the deep floodwaters.

Incidentally, we all have a new appreciation for neighborhood names, such as those with “lower”, “bay” and  “seaport”, versus “heights” and “upper”, and for that matter “Canal Street”.

With layers of expansion into East River over NYC’s history, the original waterfront street, Pearl Street (initially called “Queen Street”), is actually three blocks inland and was relatively dry.  However, landfill was used to extend the neighborhood seaward, and Pearl Street has been superceded by Front Street, and then by Water Street, and then seaward of that by South Street / FDR Drive and the modern-day waterfront park promenade.   Landfill compresses with time, so it is a downhill path from the seawalls down into this area, and these streets were temporarily re-claimed by the hungry East River during Sandy’s sojourn.